Blizzard like snow falls are becoming the “new norm.” You have got to take winter roof preparation seriously.

Use this link to see what’s going on in the mid states of our country.

Blizzard like snow is already falling and its only October!! See an accident before it happens!

Winter Storm Atlas delivered feet of snow from the northern Rockies to the northern High Plains Thursday through Saturday, Oct. 3-5. As the region recovered, late reports continued to trickle in as late as Monday afternoon, long after the storm had ended. Here’s a roundup of the impacts of Atlas: 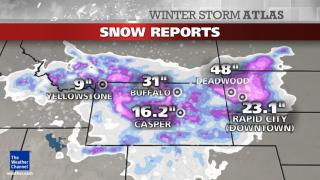 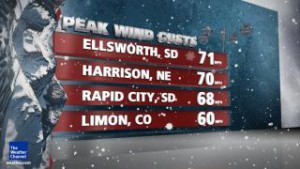 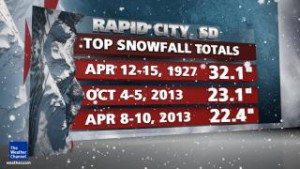 Top historical snowstorms in Rapid City, S.D.; two of the top three have occurred in 2013.

A Monday update from the National Weather Service indicated that the top total was 3 miles southeast of Beulah, Wyo., just over the state line in northwest Lawrence County, S.D. At this location, an incredible 58 inches of snow fell. The liquid equivalent there was 6.78 inches of water, over 20% of the average annual precipitation in this area. Other totals included:

The official total of 23.1 inches in Rapid City makes this the second heaviest snowstorm on record in the city. Nearly six months ago they recorded their now third heaviest snowstorm on record with 22.4 inches from April 8-10, 2013. It is also by far the biggest October snowstorm in Rapid City; in fact, the 23.1 inches from this one storm dwarfs the city’s previous record for the entire month of October, which was 15.1 inches in 1919.

Around 30 inches fell in the southern Big Horn Mountains and on Casper Mountain, according to the National Weather Service.